The Gigabyte Z390 AORUS Pro is one of the pricer Gigabyte motherboards available. Given the high price and its winning feature of being able to support Coffee Lake, we thought it would be a good idea to see if the board lives up to the hype.

In this review, we put the Gigabyte Z390 AORUS Pro to the test. We take a look at some of its key features and some areas where we wish it could do better 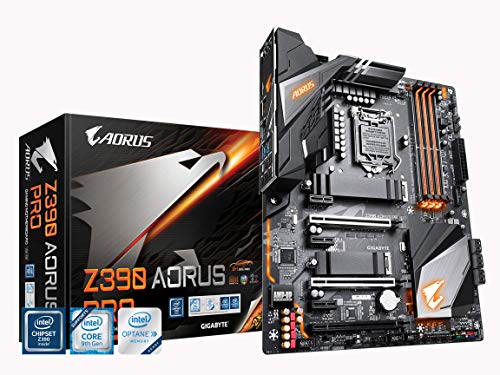 The Gigabyte Z390 AORUS Pro is a highly competitive addition to the Gigabyte motherboard line and it certainly has the features to back it up. The Z390 is an impressive chipset and at first glance, the board has an impressive amount of USB and RGB support.

An impressive feature is that the board supports both 8th and 9th Gen Intel Core processors which offer a quality user experience and pushes this board into the high-end range. It also sports a 12-phase power delivery system.

The closest competitor to the Z390 AORUS Pro is the Gigabyte Z390 AORUS Master since they share numerous features and have similar performance statistics.

The Gigabyte Z390 AORUS Pro is a bit pricier than the average Gigabyte board. But it comes with a plethora of premium features that more than justify the cost. We also found the board to be incredibly versatile. It works well whether you need it for video editing, gaming, or building up a trade computer.

The Gigabyte Z390 AORUS Pro is a very attractive board and it is clear that the manufacturers and designers put care into its layout.

There are three PCIe x16 slots, the first runs at full speed, the second runs at 8x speed, and the third at 4x speed. This is great for any kind of user since it increases the speed and efficiency of your components.

The board also supports dual-graphics systems from both AMD and NVIDIA. This is great if you’re planning on using your PC for video editing, art, or graphic design, as the increased rendering power means less time waiting for things to load.

The PCI and memory slots have been reinforced with steel struts. This increases the stability and durability of the board which is great if you plan on adding hefty components.

The AORUS Pro also comes with two M.2 slots, both of which have a heatsink to keep the board cool.

Gaming enthusiasts will be happy to know that it comes with four RGB lighting strip headers which are great for increasing the aesthetic and lighting up your system.

The rear I/O plate has five full-sized USB 3.1 ports, two of which are Gen 2 ports. There’s a USB 3.1 Type-C port, and five audio jacks, which are great for music production.

Is the Gigabyte Z390 AORUS Pro good for gaming?

The Gigabyte Z390 AORUS Pro is good for gaming. While not specifically designed for it, the AORUS Pro is versatile and, depending on your setup, works for a variety of uses from gaming to video editing and music production.

If you’re looking for a Gigabyte motherboard that was specifically designed with gamers in mind we suggest you check out the Gigabyte Z370 AORUS Gaming 3 or the Gigabyte X470 AORUS Ultra Gaming.

Which RAM cards are compatible with the Gigabyte Z390 AORUS Pro?

“The Gigabyte Z370 AORUS Pro is hands down the best value for money for a fully capable Z390 overclocking motherboard.

The build quality is amazing and it is very solid. It also has a ton of headers for fans, RGB lighting, and USB ports.  It also has a great quality VRM heat pipe that no other board in this price range has.

Now, if you’re an overclocker, this is the board for you. It is so capable and very stable.

I have heard that there are a few issues with the BIOS however I haven’t experienced any.”

“The Gigabyte Z370 AORUS Pro looks amazing and performs well. It was also super easy to install and set up.

I only experienced one issue with the board and that is that the HDMI port didn’t work. This was a bit irritating since I returned the board for a new one and the new board had the same issue.

I currently have this board in my PC set-up and I am not willing to tear down the entire system and rebuild it for a second time or go through the trouble of finding another compatible motherboard.

Luckily, I have two additional HDMI ports on my rig and I can also use a USB to HDMI adapter if I need to.”

If you want to stay on top of recent motherboard developments, be sure to check out some of these articles: