As the most affordable X470 motherboard on the market, the Gigabyte X470 AORUS Ultra Gaming is a good entry-level motherboard with some tricks up its sleeves.

This review covers everything you need to know to make the best decision buying a motherboard.

We dive into what makes this motherboard good, from its innovative audio system to accessible fan support. 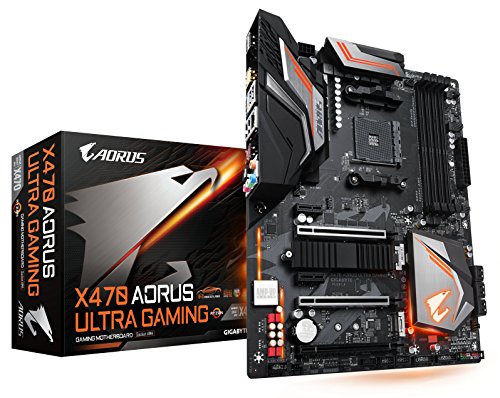 A total of four DDR4 DIMM slots support a maximum of 64GB RAM, that when overclocked can reach a stable 3600MHz.

The Gigabyte X470 AORUS Ultra Gaming has a variety of options to expand your storage.

It boasts a total of three reinforced PCIe slots. The first one is 16x, the second is 8x, and the last one is 4x. This indicates the number of data lanes a graphics card connection has. Slots with more lanes have higher bandwidth.

Reinforced slots increase the rigidity of the port, allowing the user to install heavier cards. This unlocks a world of more powerful processors, with no more stressing over bending or breaking your new GPU.

The motherboard has dual M.2 slots allowing for SSD storage options in addition to HDDs.

The board has a total of seven fan headers that operate independently, an improvement from the Gigabyte X570 Aorus Elite’s four fan headers.

A good cooling system keeps the hardware cool and prevents overheating. This increases the performance and lifespan of the hardware.

The motherboard also has strengthened heatsinks that can withstand high temperatures and ensures that the VRM doesn’t overheat.

This can damage the motherboard’s components and your PC won’t be able to function correctly. We commend Gigabyte for including so many fan headers.

It’s important to note that, unlike the Gigabyte B450 AORUS Pro Wi-Fi, there’s no built-in Wi-Fi or Bluetooth support on the rear I/O. This is unfortunate since we expect most motherboards to come with Wi-Fi options these days.

Fortunately though, the Gigabyte X470 AORUS Ultra Gaming has plenty of USB connections and ports.

These include four USB 2.0 connections, two USB3.1 connections, two USB 3.0 Gen 1 ports, one USB 3.2 Gen 2 connection, USB Type C support, an HDMI port, and an Intel LAN port. We found the variety of ports to be useful as it allows you to use many USB peripherals simultaneously.

This motherboard is perfect for newcomers to the PC gaming scene or for those building a rig on a budget, although it’s not as powerful as its sibling Gigabyte Z390 Gaming X.

The Gigabyte AORUS Ultra Gaming is fitted with an X470 CPU socket, supporting both Ryzen and Ryzen+ processors.

This and the dual M.2 slots allow the user to install SSDs and make use of AMD’s StoreMI technology. It also combines the SSD and HDD into one virtual drive.

Finally, it improves load times when playing graphics-intensive games so you can jump into the action immediately.

The Gigabyte X470 AORUS Ultra Gaming is equipped with an ALC 1220 Realtek chipset.

Noise interference won’t be a problem as the chip is situated far from the other components on the motherboard.

If you don’t want to use the ALC 1220 Realtek chipset, there’s no need to worry as Gigabyte has included five audio jacks located on the rear I/O that support 7.1 surround sound.

This board has an orange and black design that grabs the eye of anyone looking.

It has RGB support with different lightning zones around the board for those who want to add a personal color scheme to their PC.

Like the Gigabyte Z390 Aorus Pro, this motherboard has a dual BIOS chipset that protects the user from BIOS failure.

Unfortunately, the BIOS is the most disappointing feature this motherboard has to offer.

The BIOS overclocking settings are extremely limited, so much so that you can’t change a component’s voltage on the motherboard. Instead, the BIOS uses dynamic voltage offsets, meaning that there isn’t manual control over the voltage numbers.

Using the provided overclocking software and a regulator for controlling a component’s voltage leads to clean and reliable power when overclocking.

For the RGB settings, you’re required to install AORUS RGB fusion that gives you access to a wide range of colors and lighting modes.

To have access to the fans and the temperature sensors around the board, you need to install the Smart Fan 5 Companion software. This keeps track of your fan status and enables you to control the individual fans.

The Gigabyte X470 AORUS Ultra Gaming supports all Ryzen processors, making your choice of purchasing a processor an easy task.

How does this motherboard compete with the other X-series Gigabyte boards?

The Gigabyte X470 Aorus Ultra Gaming doesn’t have the same RAM capacity or DDR4 support as the newer x-series motherboards like the Gigabyte X570 Gaming X.

However, it has the upper hand with its SLI support, which enhances your gaming experience when using multiple graphics cards.

Does this motherboard have any onboard buttons?

This motherboard has no Clear Bios or CMOS buttons, which is unfortunate. This further adds to the disappointment of having no integrated Wi-Fi.

“This is a motherboard that is well worth the price. I am currently using a Ryzen 5, and it was an easy installation. There is a good amount of fan headers and RGB on the board too. It came with many screws and connectors in the box. My only issue with this board is that there’s no WI-FI integration. However, that doesn’t take away from the fact that this is a great motherboard”

“Despite the overall quality of the hardware being decent, the software in the “app center” feels like unnecessary additions. You can’t change any overclocking settings or RGB in the Bios, those settings require their app. The BIOS is barebones and hopefully, after some updates, it will get revised”

If you want to read up on the best-reviewed Gigabyte motherboards, check out our roundup of the Best Gigabyte Motherboard of 2021.

Below you will find related motherboard articles