The ASRock Z370 Pro4 lands on the lower end when compared to the other motherboards in the Z370 lineup. But it’s also a decent amount cheaper than a lot of its siblings. This got us thinking, how does this piece of hardware compare to other boards in the same class? Is it worth the money or should you look elsewhere for your system?

In this review, we focus on the features and firmware that come along with this board and how it measures up compared to the others in the ASRock premium class.

If you’re a PC builder, gamer, or computer enthusiast looking for an affordable, pro motherboard, this article is for you. 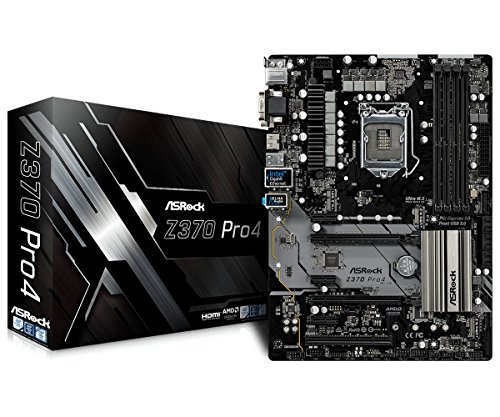 Despite being an entry-level board, the Z370 Pro4 allows users to access the full 64GB of memory and has speeds of up to 4244Hz, which is impressive. It also sports full-length PCIe x4 slots from the chipset, including a legacy PCI slot that works more efficiently than regular slots.

These features alone are quite impressive and should satisfy mainstream PC users.

The board also has 4-pin fan headers, which gives you the option to attach a chassis optional/water pump fan which can deliver around 1.5A/18W. If you decide to get this board, we recommend that you invest in a liquid cooling system since it lacks heatsinks.

The ASRock Z370 Pro4 also has a nice Realtek ALC892 audio codec and ELNA audio caps which are great if you’re into music production or video editing. However, you’ll need to configure the audio components and enable them through the driver.

One downside to this board is that, to shave a few dollars off production costs, ASRock switched up a few features, such as only having one VRM heatsink. This can cause overheating, especially if you’re into overclocking.

Another drawback is the board’s lack of slot reinforcement which lessens the durability of the components.

Aesthetically speaking, the ASRock Z370 Pro4 doesn’t look bad. It has a mainly black design with grey accent colors. However, the board doesn’t have any window dressing or RGB LEDs which is quite disappointing, especially if you want to build an aesthetically pleasing system.

If you’re looking for a board with RGB LEDs we would recommend the ASRock Z370 Extreme4.

Like most ASRock motherboards, such as the ASRock Z370 Killer Sli/AC and the ASRock H97 Pro4, the Z370 Pro4 sports the general BIOS they’re known for.

The firmware opens up to a default EZ Mode interface that holds the fan settings, the XMP enablement settings, and the Turbo 4.5GHz profile.

You can also easily switch the menu to an Advanced Mode GUI. ASRock even allows you to set either the EZ or Advanced Mode to your default BIOS, which is handy for tweaking those micro-settings hidden in the more advanced menus.

The ASRock Z370 Pro4 supports the premium 802.11ac wireless connections via the M.2 slot. However, while the board supports Wi-Fi it doesn’t come with an onboard module.

So, you’ll have to find and buy a compatible Wi-Fi module separately if you want to use this feature.

The ASRock Z370 Pro4 motherboard is a good option for casual gamers looking to upgrade their system. While on the lower end of the spectrum, the Z370 Pro4 is still a premium motherboard and should be able to run most spec-intensive games without much of a problem.

However, how well games run depends more on the graphics card than the motherboard.

If you’re looking for a motherboard specifically designed for gaming, we recommend you check out the ASRock Fatal1ty B450 Gaming K4.

Here are what users have had to say about the ASRock Z370 Pro4:

“I upgraded my gaming PC and chose the ASRock Z370 Pro4 since it was compatible with the new processor I just got (Core i5-9600k).

The ASRock Z370 Pro4 came at a great price and the reviews are excellent. I love how well it looks and fits in my gaming case. While it isn’t the fanciest of motherboards, I think it has some great accents and a pretty color scheme.

I was able to attach four RAM cards, my GPU, an M.2 SSD, and several other storage devices without an issue. The board held up well and thus far I haven’t had any issues with it.

ASRock makes great motherboards and while it might not be the flashiest or most expensive, it is well-built and gets the job done.”

“I rated the ASRock Z370 Pro4 3 stars because when it arrived the box had little marks all over and wasn’t sealed. It also didn’t have any safeguards against moisture which most packaging has.

I also don’t know if the board that came was new. The instruction booklet and cables were in place and the driver CD was also present. I took the risk, and I held the card for a moment and it looked fine.

I installed it and I think the board looks much better without lights. I was also okay with the number of ports for the SSD M.2 and the ports for the USB, WIFI, and other connection types. The price was also decent.”

Here are a few articles we recommend you check out: