The ASRock z370 Extreme4 has been on our radar for some time due to its price and extensive range of features.

ASRock Inc. is a leading brand in technology and computer components and the ASRock z370 lives up to this reputation.

The ASRock z370 Extreme4 is a mid-range motherboard ideal for most PC users, ranging from gamers to builders and everything in between.

In our review, we give you an overview of the motherboard, present the pros and cons and explore user opinions of this chipset. 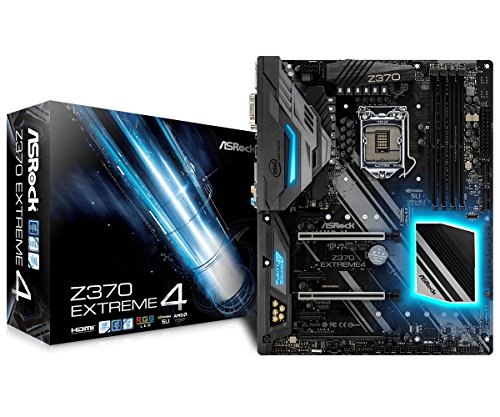 ASRock Inc. was established in 2002 and has made a name for itself manufacturing affordable, efficient motherboards. Their lineup of motherboards is truly outstanding.

You can check out our ASRock 970M Pro3 review and ASRock Fatal1ty z97 Killer review if you’re interested in exploring the brand.

If you’re looking to upgrade your PC and are pressed for cash, the ASRock z370 Extreme4 should definitely be on your list. The ASRock z370 is an affordable motherboard that hosts an array of components.

The z370 extreme4 sports the same sleek design that ASRock is known for.

It features the signature two-tone theme of black and grey with a smooth matt finish. The design is gorgeous and the board is filled with various features and components which is a welcomed change from the airy ASRock fatal1ty b450 gaming k4.

What makes the ASRock z370 stand out among other mid-range motherboards is that it sports features that are generally reserved for more high-end motherboards.

The USB 3.0 and 3.1 headers are excellent for improving connectivity and provide users with extensive front panel support.

The ASRock z370 offers users the ability to connect four 4333MHz DDR4 RAM cards to boost the speed and memory bandwidth of their PC. This added feature is ideal for playing spec-intensive games or for users who require high performance.

In addition to this, gamers will be pleased to know that the board sports D-Sub, DVI-D, and HDMI connectivity options. This gives you a wide range of monitors that will fit with your PC.

The D-Sub and DVI-D allow for a 4k resolution at 30Hz, giving you a sharp, clear image.

Enthusiasts will be happy to know that the standard CPU fan connector supports a maximum output of 1A. The ASRock z370 also sports an optional water pump header which is great for cooling your PC.

One of the biggest issues we have with the z370 is that it lacks a built-in Wi-Fi component. While it allows for a Wi-Fi module, you’ll have to find a compatible one and install it yourself.

If you’re building a PC from scratch, this might not be an issue but for more casual users, missing a Wi-Fi and Bluetooth component can be a deal-breaker.

The performance of the ASRock z370 is nothing to scoff at.

The ASRock z370 performs consistently, especially when compared to other motherboards like the ASRock z370 Pro4. Comparing the two, the Extreme4 uses less power and delivers more consistent performance.

A downside to the ASRock z370 is that it requires more power when overclocking and, while it has good overclocking abilities, this can cause overheating if abused.

Is the ASRock z370 Extreme4 a good motherboard?

The z370 extreme4 is good not only for its affordability but also for its high-quality components and great all-around performance.

The ASRock z370 is a great choice for hardcore gamers, video editing, sound editing, and other spec-intensive activities.

Is the ASRock z370 Extreme4 good for crypto mining?

While it’s not the first choice for most crypto-miners, the ASRock z370 Extreme4 is a capable motherboard for crypto mining. The large number of PCI Express slots allow users to cram in video cards to get those coins faster.

Not only that, but the overclocking abilities of this board further solidify it as a crypto-ready piece of hardware.

The ASRock z370 supports the 9th Gen Intel Core processor due to the updated BIOS. This is exciting given that most mid-range motherboards are unable to support 9th Gen processors.

9th Gen Intel Core processors have long been exclusive to high-end motherboards, but the ASRock z370 has truly changed the game.

‘The ASRock z370 Extreme4 is a pretty good motherboard. The UEFI is pretty nice but they could’ve done a better job explaining some of the features inside. The offset of the CPU voltage could’ve been explained better too and the same goes for the LLC and a few other features.

What annoys me is that I realise that the motherboard came without a jumper for the CMOS clearing. I searched everywhere thinking that I might’ve lost it but I am very careful with components and then realised they just didn’t include it. That was kind of disappointing.’

‘The ASRock z370 Extreme4 booted up on the first try. I paired it with a i5-8600k (air cooler cryorig H5 universal), and it is blasting quickly. It also picked up the RAM easily with the XMP profile.

I would definitely recommend this board to any pc user looking for an upgrade. I am a loyal ASRock user, and I’ve been using their boards since 2012. When it came time to upgrade, the ASRock z370 did not disappoint.

After almost 4 months of using this motherboard, I still don’t feel the need to overclock because it’s working just fine for my daily tasks and gaming. It is very stable and working exactly as I expected. The temperatures are pretty expected as well.

I am just as happy with the ASRock z370 Extreme4 now as the first day I used it.’

Here are a few articles we recommend you check out: