If you’re a gamer looking for a motherboard to complete your rig, look no further than the ASRock Z270 Extreme4.

We will discuss everything this board has to offer, from its impressive Purity Sound4 codec to the reasons gamers should consider purchasing this motherboard.

This is a high-end motherboard filled to the brim with impressive features, all at an affordable price.

If you’re still unsure about anything, check out the end of our review where we answer some commonly asked questions about this board. 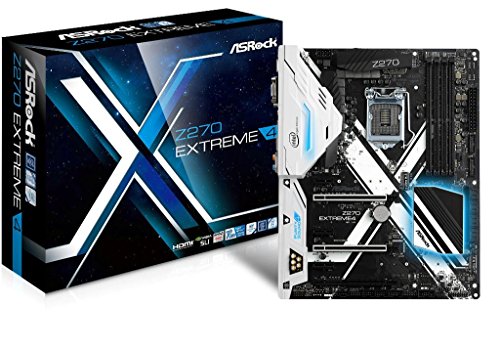 ASRock excels at providing its customers with durable and reliable computer parts, and the Z270 Extreme4 is no exception.

From its hardware capabilities to the dual BIOS and use of RGB, this is a motherboard for gamers looking to easily build a performance rig.

The ASRock Z270 Extreme4 has four DDR4 DIMM Slots capable of supporting up to 64GB. These slots support XMP 2.0 and Dual-Channel memory, with frequencies up to 3733MHz.

The inclusion of three PCIe 3.0 and the eight SATA ports – six of which support RAID – all running at 6GBs demonstrates the motherboard’s strength in storage and ease of expansion.

The ASRock Z270 Extreme4 makes use of three M.2 slots. Two of these slots are for SSDs, whilst the other is for a WIFI expansion chip.

Unlike the ASRock X370 Killer SLI/AC, the Extreme4 does not include built-in 802.11ac Wi-Fi. It does, however, include two antenna brackets to install a network card.

The USB ports are located next to the antennae. No USB is left out as this board supports USB 2.0, 3.0, and superspeed 3.1 with the connections supporting both Type A and Type C.

The Z270 Extreme4 boasts ASRock’s very own Purity Sound4, based on Realtek’s ALC 1220 8-channel audio codec which is also found in the ASRock X299 Taichi.

This allows for the best quality signal-to-noise ratio DAC, reaching upwards of 120db, making this one of the best onboard audio codecs that ASRock has to offer.

It allows the use of DTS connect, making audio conversions and formatting an easy task.

Get Ready to Game

Compared to gaming-centric motherboards such as the ASRock Fatal1ty B450 Gaming K4, the Z270 Extreme4 comes out on top.

The first reason being the inclusion of NVIDIA’s SLI function.

Like the ASRock Z370 Killer SLI/AC, the Z270 Extreme4 makes use of SLI and Crossfire technology. This means you can run two graphics cards simultaneously using the high-bandwidth SLI bridge

This allows gamers to run graphic-intensive games at the highest settings, reduces lag and frame drops, making the ASRock Z270 Extreme a motherboard that belongs in a powerful, high-end gaming PC.

The ASRock also has extra SATA and PCIe ports that the previously listed motherboards lack.

ASRock has chosen to go with a classic black and white design for the Z270 Extreme4. The white accents, along with the X marked in the center, stand out against the background.

However, if you wanted to add more personal changes to your motherboard, ASRock has you covered with their color Aura RGB LED software.

Using this software allows you to add a variety of colors to your RGB headers.

This will enable you to change independent lights, and gives you the option to change the lights’ display mode.

In addition to that, the included Polychrome software can be found in the BIOS but has limited capabilities compared to the Aura software.

Having the ability to add color to your rig makes picking a theme a breeze.

When it comes to the BIOS, ASRock is king.

The ASRock Z270 Extreme4 has a dual BIOS with advanced or simple different modes. Both modes are well organized and offer a variety of settings and menus.

The simple mode displays typical BIOS settings such as storage configuration and fan status. Advanced, however, includes extra functions such as setting up overclocking profiles, updating or resetting the BIOS settings through an internet connection, and tuning fan speeds.

Speaking of overclocking, due to the ten-phase power design and plenty of fan headers, the ASRock Z270 Extreme4 can comfortably overclock at 3777MHZ. Using an intel i7 7700K, the motherboard reached a stable 5GHZ at 1.408V.

If you purchase the ASRock X270 Extreme4, chances are that you are using a 7th GEN Processor from Intel, all of which work on this motherboard. This includes the Dual-Core Pentium.

Having these modern processors means that there is no need for a BIOS update. However, if an update is necessary, you will be able to install those updates from the ASRock website.

Now that we’ve reviewed the ASRock Z270 Extreme4, let’s go over some Pros and Cons.

What is the purpose of the steel PCIe slots?

The purpose of steel slots is to allow the user to install heavy graphics cards with less risk of damaging the board slots.

This increases the rigidity and decreases the chance of having signal interference.

Can I turn off the RGB?

ASRock’s AURA RGB LED software and the BIOS gives you the option to turn off the RGB headers if colors aren’t your style.

The only LED that you cannot control is the red header that indicates if the computer is on.

What’s in the package?

Inside the well-organized box, you will find one I/O shield, an ASRock SLI high-bandwidth bridge, four SATA cables, the ASRock driver disk and Software manual, a quick installation guide, three M.2 screws, and a postcard.

ASRock never disappoints with its packaging as everything is neatly placed into convenient compartments.

“When I first built my PC, I had a cheap and low-end motherboard, so I bought this one as a replacement. Where many of my VR or high-performance games would freeze and run inadequately using a GTX-1070 and an i5-6600k, purchasing the ASRock Z270 Extreme4 was the best decision I ever made! I have zero problems when running those games now. With clear instructions provided in the setup manual, getting this beast up and running was simple. If you have a 6th gen CPU like me and want the ability to get everything up and running in an instant, then I highly recommend this motherboard in your PC. An outstanding board!”

“The ASRock Z270 Extreme4 functions as advertised and has amazing firmware, a feature that wasn’t the main highlight during its marketing. I only have one issue with this board and that has to do with the RGB. Whenever the board is on, there is a beaming red LED coming from the board that cannot be controlled. I know there is a lot of hype around RGB but I find this to be an unnecessary addition to the motherboard. Otherwise, I think this ASRock board is ten times better than my previous ASUS models.”

It’s always good to keep yourself read-up on the latest and greatest motherboards. Click one of the links below to read more of our articles.