ASRock provides the PC market with well-designed, powerful motherboards and the X299 Taichi is no exception.

With so many options on the market, choosing the right motherboard to meet your needs is a chore. Thankfully, we’re here to make your life a little easier.

In this review, we’ll be looking at the ASRock X299 Taichi motherboard in terms of its hardware capabilities, peripheral components, and how it helps gamers get the best from their system.

If you’re still unsure whether this is the right board for you, stick around to the end where we answer some commonly asked questions about the X299 Taichi. 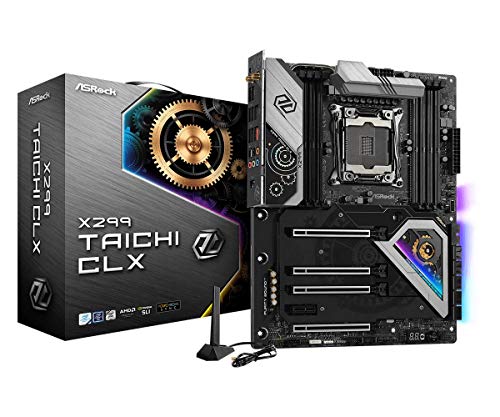 There is much to admire and appreciate about the ASRock X299 Taichi motherboard.

From its hardware and wireless controller capabilities to the adjustable RGB software and easily accessible BIOS, this is a motherboard that both gamers and PC techies can appreciate.

From a hardware perspective, the inclusion of the three ultra-M.2 slots is a welcome addition to ASRock’s motherboards. This makes storage more efficient due to the increased capacity and speed of SSDs.

Both the ASRock X299 Taichi and the XE model have a total of five four-pin fan headers. These headers are useful for detecting what type of fan is installed on the motherboard.

The board features a thirteen-phase power output that can support up to 1300 watts.

The ASRock X299 Taichi supports Intel i5 processors and upwards.

This board is beneficial to gamers looking to build a powerful machine. It balances gaming with overclocking, something many motherboards struggle with.

It may be more expensive than the ASRock Z390 Pro4 gaming board, but this is one of the more affordable X299 motherboards available on the market.

The average VRM temperature when running an MMO at maximum settings was 122° Fahrenheit at a constant 4.7 GHz. This means that you can expect cooler recordings when running demanding games at their highest settings.

The motherboard typically records a stable power rating of 4.8 GHz.

The ASRock X299 Taichi is equipped with ASRock’s Purity Sound 4 technology, which allows you to format audio and make use of DTS-connect.

Another innovative feature located on the rear-end of the motherboard is the BIOS flashback and clear CMOS buttons. This, unlike 2017’s ASRock B250 Pro4, allows you to update the BIOS without a CPU and reset the BIOS settings.

Speaking of the BIOS, ASRock yet again delivers with a sleek design and lag-free interface that includes a variety of overclocking options and system settings.

One of the features included in the BIOS of the ASRock X299 Taichi is the ability to test the power rating and consumption when running various programs or adjusting a few settings.

The overall appearance of the motherboard is a neutral, stealthy grey that is not filled with RGB but includes enough of it to add personal flair to the board.

These preferences can be set using the ASRock Polychrome RGB software, which has been an inclusion in the older ASRock motherboards such as the ASRock B450 Pro4.

Here are some pros and cons to note before purchasing the ASRock X299 Taichi motherboard.

What is included in the package?

The box includes two instruction manuals, a driver CD, a three-way and a two-way SLI bridge, an I/O shield, two M.2 screws, two Wi-Fi adapters, four SATA cables, the board itself, and a postcard.

ASRock wastes no time in wanting to get your brand-new motherboard up and running as all the necessary cables and equipment are provided in a well-packaged box.

The ASRock X299 Taichi XE, or “Xtreme Edition”, is used for more powerful overclocking. The XE has a dual power connector, a feature that is not present in the standard X299 Taichi.

Everything else remains the same between the two motherboards.

How does the ASRock X299 Taichi compare to other motherboards in the X-series?

When comparing the ASRock X299 Taichi to the other X-series boards such as the ASRock X370 Killer SLI or the ASRock X570 Pro4, the differences are seen in its hardware and longevity.

The Taichi has wireless LAN integration, more memory and the overall performance of the board outshines those listed above.

You will get your money’s worth when purchasing the ASRock X299 Taichi due to its features and ability to easily upgrade the board.

This is one of the best X-series motherboards that ASRock has to offer.

“I originally had a Z99X Killer and am pleased with the Taichi being my replacement. Testing out the overclocking capabilities of the board, along with my Intel I9 9820x, I managed to overclock at a stable 4.4ghz. The motherboard also allowed me to have up to 128GB of RAM making this a very powerful board. However, making use of different RAM simultaneously is not something I would recommend. My H115i PRO liquid cooling is almost completely silent and doesn’t produce any noticeable noise. I am glad that I changed from the killer to the taichi.”

“Out of all the PCs I have built in my time, the ASRock x299 Taichi has to be one of the best motherboards I have ever used. Running it with an I9-7940x while making adequate use of the 128GB RAM storage the board offers, it’s safe to say that this is as stable and solid as motherboards get. I am very happy with my purchase”

Be sure to read through our other articles to see our team’s reviews on a variety of motherboards.