Is the ASRock H97 Pro4 any good? Does it have the specs to hold up against other motherboards in the same price class?

No doubt you will remember our ASRock Z97 Extreme4 review. However, we haven’t had much chance to look at more mainstream and budget-friendly ASRock motherboards.

In this review, we will be taking a close look at the new ASRock H97 Pro. We look at its peripherals, graphics, and supported processors among other things. Let’s dive in. 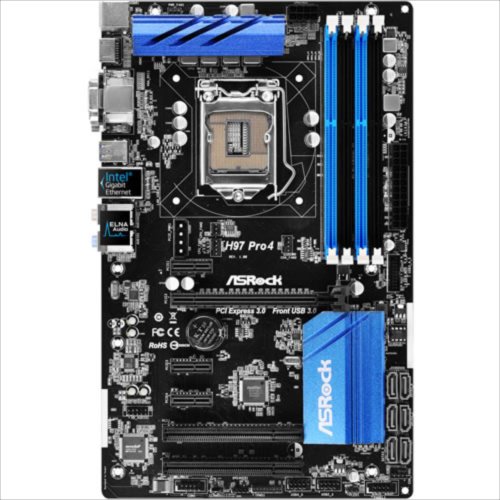 The tiny ASRock H97 Pro4 is surprisingly good for its affordable price. It offers some overclocking capability along with CrossFire and Thunderbolt support.

Like other budget-friendly motherboards, the ASRock H97 Pro4 is packaged with minimal accessories. What it lacks in features, it makes up for in attitude.

Intel’s Turbo Boost 2.0 technology allows your processor cores to run faster than the rated operating frequencies. It does this automatically if they are performing below specific power and temperature limits.

The ASRock H97 Pro4 shows off with 4 DDR3/L DIMM slots. That is more than most other similarly priced micro-ATX motherboards. You can get a maximum of 32GB RAM on this motherboard.

It also has a decent number of USB ports. You get spoiled with 2 USB2.0 ports and an additional 4 USB3.1 (Gen1) ports.

You get a whopping 6 SATA3 connectors for drives, each clocking in at a steady 6.0 Gb/s. This handy feature offers some great options to expand the H97 motherboard.

While it has fewer peripherals than we saw in our ASRock Fatal1ty zZ97 Killer review, it still has enough to suit most of your needs.

While the ASRock H97 Pro4 has no onboard graphics, it offers 1 PCIe 3.0 x16 slot with Crossfire support. If you are looking for a motherboard with more PCIe slots, read through our ASRock H110 Pro BTC+ review.

The ASRock H97 Pro4 has most of your audio needs covered. An industry-standard Realtek ALC892 audio chip with 7.1 audio channels drives the audio behind this little beast. The Premium Blu-ray Audio support is a great bonus.

Like the ASRock B450M Pro4 motherboard review, the ASRock H97 Pro also comes out in the now-familiar jet-black. We find that this goes well with most color schemes.

In an odd move, ASRock decided to put the HD-Audio port right above the primary PCIe port. It makes connecting your graphics tricky, but nothing that can’t be overcome.

ASRock once again showed that they are capable of creating motherboards for different people. We found the ASRock H97 Pro an inexpensive motherboard with enough capacity to expand on.

While not nearly as powerful as the ASRock Z97 Extreme4 review, it still ends up being top of the class considering its price range.

Price and functionality are what sets this board apart.

Can you overclock the ASRock H97 Pro4 motherboard?

You can overclock the ASRock H97 Pro4 motherboard. Make sure that you have updated your BIOS to the latest stable version before you overclock it. ASRock makes upgrading the BIOS easy with its simple tools.

Is the ASRock H97 Pro4 motherboard compatible with AMD processors?

The ASRock H97 is not compatible with AMD processors. It only supports Intel processors with the 1150 socket.

Is it possible to use Thunderbolt on the ASRock H97 Pro4 motherboard?

“The ASRock H97 Pro4 motherboard is a solid motherboard for its price. It has great features with SATA3 slots and has 32GB maximum RAM. It is also very well supported through online updates.”

If you’d like to know more about motherboards available on the market right now, have a read through some of these articles: